The State Street of Tomorrow 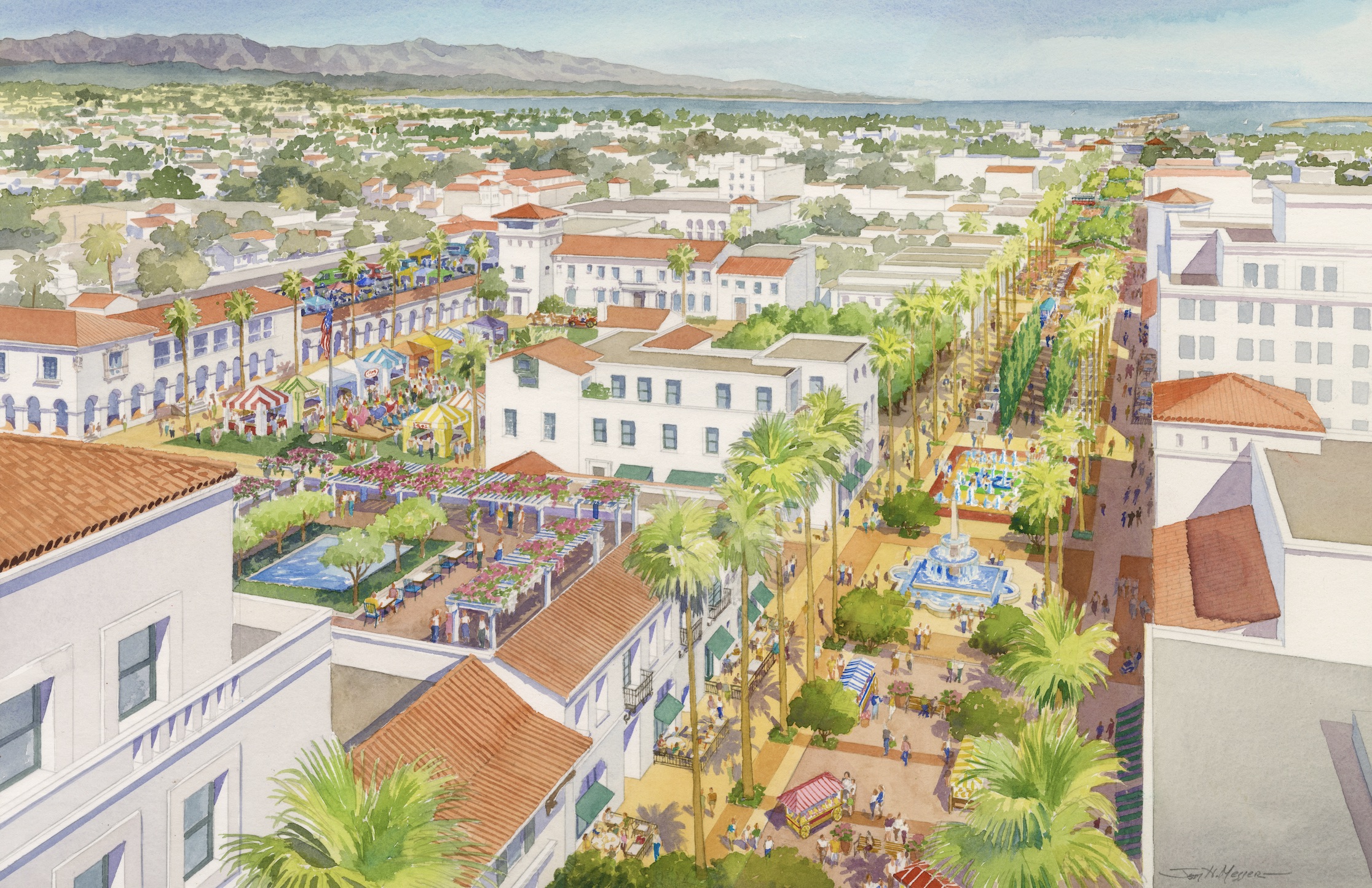 For seven weeks this summer, unencumbered by budgets, permits, or other pesky constraints, a small army of Santa Barbara architects let their imaginations run wild with possibilities for a State Street of the future. The intensely collaborative and creative design exercise, known as a charrette and in this instance done virtually, generated an array of options for a post-COVID downtown with fewer cars and far more housing. None of the proposals are binding in any way and instead are meant to kick-start conversations among the public and city leaders.

“Our city is dealing with a confluence of three major crises: a worldwide pandemic, a dramatic economic crisis, and a housing crisis,” said Detty Peikert in the opening remarks of a two-hour Zoom presentation put on last Thursday by the Santa Barbara chapter of the American Institute of Architects (AIA). “The confluence of these crises has created a watershed moment for the city, not unlike the 1925 earthquake. It is these unprecedented events that are outside of our control that create the very opportunity to realize positive change.” 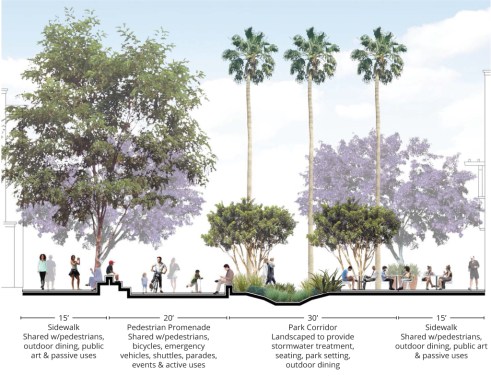 The ideas put forth, accompanied by bright illustrations and detailed explanations, ranged from the marvelous to the mundane ― from water elements and sky bridges and a sprawling mixed-use project called El Pulpo (“The Octopus”) to permeable pavement and bike parking. Some seemed almost immediately feasible while others felt far too ambitious. All of the brainstorming efforts, however, were premised on the widely held belief that building apartments, creating open space, and establishing a permanent State Street promenade are the three key ingredients for a recharged commercial core.

As ambitious as they got, the architects took pains to preserve the city’s classic Spanish colonial character in their sketches and renderings. “We have an established community identity, one that we will not abandon,” explained Lauralee Anderson. “But we will expand upon this sense of place that we’ve created, and it will be flexible and adaptable for decades to come.” More than one presenter described State Street as the “spinal column” of downtown and the envisioned parklets, plazas, and walkways as the “connective tissue” between its businesses and living spaces.

A number of engineers, landscape architects, interior designers, transportation specialists, and others also took part in the charrette. The nearly 160 total participants divided into 16 teams with each team focusing either on State Street itself or the adjoining individual blocks. Vertical additions and rooftop gardens were common themes. So were bicycles and trolleys sharing the promenade with pedestrians.

Among the variety of schemes offered Thursday were a creek walk with restaurants and art pieces; the underpass repurposed into a music pavilion; a courtyard that replaces the Macy’s building and connects to De la Guerra Plaza; gateways that mark special districts like the Funk Zone and the Presidio; Copenhagen-inspired mixed-use projects with housing at ground level and commercial units above; converting the Lyons building into a school; converting the Balboa building to micro-unit apartments of 300 square feet; an outdoor library, dog park, climbing wall, playground, and permanent farmers’ market set right on State; using sandstone, manzanita, hummingbird sage, and other natural front-country elements in landscape designs; and so on.

The full presentation and accompanying visuals are available in the video posted above and the slideshow below. Large poster boards of the proposals can also be viewed in the windows of the former Wendy Foster and Forever 21 buildings on the corner of State and Canon Perdido. The materials will soon be shared with city decision-makers, including the City Council, Planning Commission, and design review boards.

If any ideas are adopted, they ought to be carried out in a “Santa Barbara style — full of inspired creativity,” said architect Ellen Bildsten, who noted that the charrette took many of its cues from a community survey that drew 5,000 responses on what residents want for a new downtown. “Broad inclusivity and participation is encouraged and necessary as we work together,” she said.