From the LA Times:

Additional bike lanes, trees, shrubs, enhanced crosswalks, benches and lighting in West Newport Beach are among several improvements outlined in the area’s proposed master plan, which will be considered by the city Planning Commission on Thursday.

In January, the city began developing the West Newport Mesa Streetscape Master Plan in conjunction with San Juan Capistrano-based RRM Design Group, which specializes in surveying, architecture and urban planning. The idea is to unify elements of the neighborhood through sidewalk, parkway and landscape improvements that encourage pedestrian and bicycle use, according to a city staff report.

“The development of a streetscape master plan was identified as the best method to direct private improvements as well as potential investment from the city in creating a unified statement for the neighborhood,” the staff report states.

The city hosted a series of public meetings this year where residents and business owners could share their ideas for potential improvements for the roughly 149 acres bordered by 16th Street, Monrovia Avenue, Hospital Road and Newport Boulevard.

Decades ago, West Newport was known mostly for its industrial uses and boatyards, but over the years residential units began replacing businesses in the area, which led to the desire for a comprehensive plan for the neighborhood.

The potential for improvements became more evident when the City Council created a height overlay zone for residential development in January 2015. The zone increases allowable heights to 40 feet for flat roofs and 45 feet for sloped roofs in exchange for increased setbacks.

The additional area provides an opportunity that wasn’t previously present to improve the roadway, lighting and other street amenities, and plants and trees in medians and along the sidewalks, according to city staff.

Directional signs, new streetlight fixtures, improved crosswalks and bike lanes also are proposed for much of the neighborhood.

If approved, the plan could be phased in, with completion in about six to eight years, according to the draft report.

The estimated cost is $6.6 million, which could be funded, in part, with a variety of federal, state and regional grants, according to the report.

If the Planning Commission signs off on the plan Thursday, the City Council is expected to weigh in within the next several weeks.

To see the complete draft of the master plan, visit www.newportbeachca.gov/home/showdocument?id=36721. 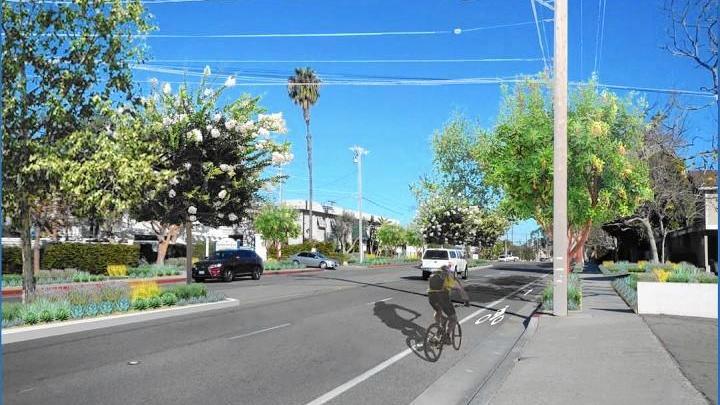