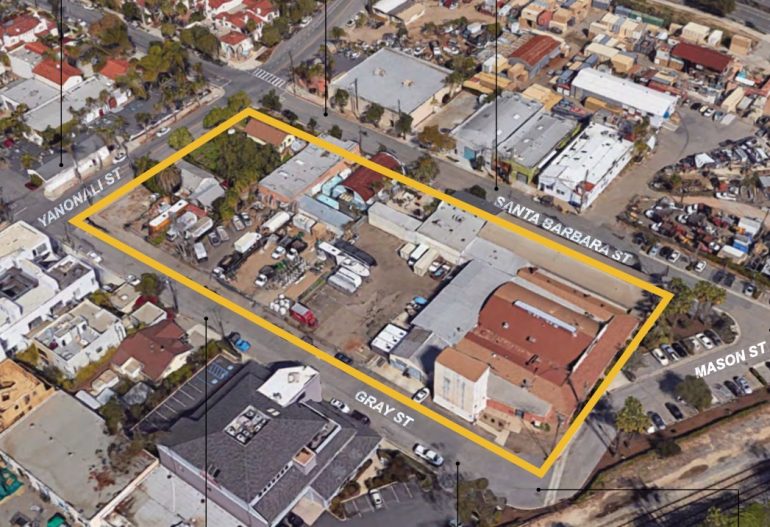 A group of investors led by developer Neil Dipaola has filed for a concept-review meeting with staff from various city departments—formally known as a Pre-Application Review Team—for the massive redevelopment of the full 2.1-acre block bordered by Yanonali Street, Santa Barbara Street, Mason Street, and Gray Avenue. The working name is SOMOfunk (as in south of Montecito Street), but that’s not expected to get used on the finished product.

Nearly all of the existing structures will be torn down to make way for “a cluster of unique buildings and identities that maintain the scale and character of the neighborhood.” The plan calls for 144 rental apartments (many of which are small, and 27 of which are for low-income tenants); 12 top-floor condominiums (two of which are for moderate-income buyers); and ground-floor commercial spaces for restaurant, retail, art studios, and light industrial use. As you can see below, the parking garages are placed in the interior, so as not to overwhelm the streetscape. The Cearnal Collective architecture firm, landscape designer CJM::LA, and civil engineer RRM Design Group have come up with a “porous” design that aims to give the area what it needs without sacrificing what makes it distinctive.

The project block has been intersected with public alleys (paseos) and public courts that engage the neighborhood and bring the interior of the block out into the public sphere. The perimeter of the project and these interior connections are lined with either commercial uses or residential uses to activate and enliven the streetscape and the interior-scape. Some of the commercial spaces are designed to further create a permeable edge to the project, the Artist Workshop space is designed with roll-up doors both facing Santa Barbara Street and the interior Artist Workshop Court. […] The commercial spaces focus more on Yanonali Street and Santa Barbara Street where the Funk Zone currently has an active streetscape.

The elevations give the best sense of how the project will be composed of a mix of architectural styles, as if the block had grown up that way over time. Click on an image to see it larger and read the text, which elaborates on many of the design decisions. For example, on Gray Avenue, there will be street-level tanks to collect rain water, an homage to factory architecture.

Much is made of the four features getting preserved (or in the case of the Loading Dock, recreated in a new building):

The Silo at 118 Gray will be open at the base, as was the case originally, allowing train cars to pull in underneath. In the second image below, note how the upper-floor apartment complex is ghosted out. This is a technique to minimize massing; real life will not be so accommodating. A scale model would give a better sense of the overall effect.

The total floor area—i.e., over all four floors—will be 193,941 square feet. The 91,497 square footage mentioned below is the lot area. The proposal more than doubles the current ground-floor area of buildings, while reducing hardscape (much of which is now truck and bus parking) and landscape. It’s a big step up from the last plan floated out, which called for just 64 apartments and around 50,000 square feet of commercial space.